I MET A MAN 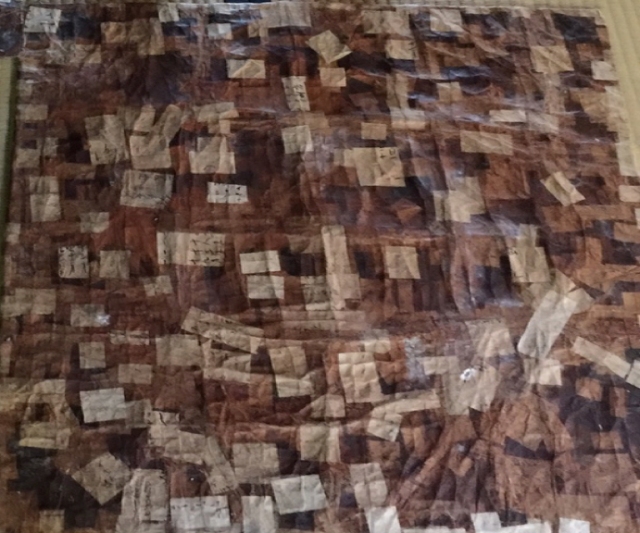 After a morning compiling Mottainai images of Boro and old Meiji era patched washi ledgers at home, my head was filled with patches and mends I couldn’t have enough of all the things I had collected over many years. Once you fall in love with Boro and things that have been saved and mended and patched and treasured, you can’t stop. You just want to see more, have more.

Late for work (again!), I rushed to the subway for the 20 minute ride to Blue & White in Azabu Juban . I had missed rush hour, so it shouldn’t be crowded, I thought. I found a seat, and across from me was an older man rifling through his rather large plastic bag of shopping. I saw a banana pass by. He took a pair of chopsticks in his hand and I wondered if he was going to eat lunch on the train. But no, he was just making sure he hadn’t forgotten anything. From another bag he took out of large scruffy greenish folder of what seemed to be more Mottainai. Patched and layered, bent with use and constant handling, his bulging album of scraps was clearly a treasure and I watched as he pored through the pages, wetting my curiosity to see what was inside. I couldn’t resist. I went over and sat beside him and asked whether that was a scrapbook. He tentatively said yes, and I told him that I had spent the morning looking at old Japanese Boro papers and cloth and rope and was very interested in scraps. Would he mind showing me what he had assembled.

He forgot his hesitation and was surprised at my interest. He told me he read the Nihon Keizai Shinbun, Japan’s Wall Street Journal every day and cut out articles and pasted them in his album. He underlined, crossed out, highlighted, circled cross hatched, colored in and annotated the important bits.

I was impressed that he only saved articles from The Japan Economic Journal and clearly prized what he read and saved. When I asked whether he ever went back to read what he had saved and pasted, he said “of course it is very important information.” 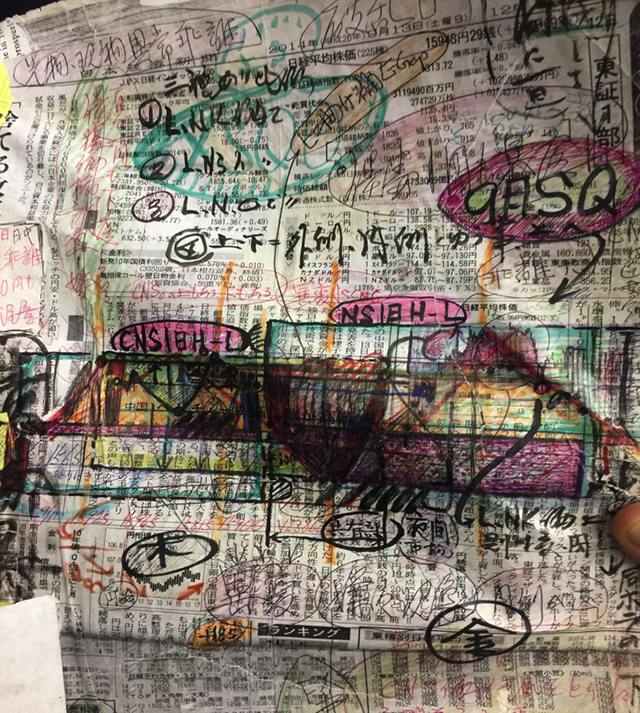 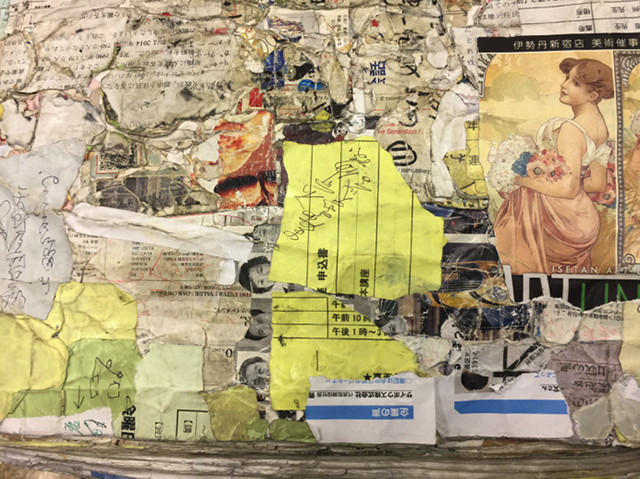 His album was thick and well worn, well read, well glued. He said he had patched the pages over and over. I asked him how long it took him to compile a scrapbook of this size, and he said he filled it in just a few months. When I remarked that his house must be overflowing with these collages, he sheepishly nodded but said that each volume was a treasure.

A few weeks ago, he told me, he had several of them with him when he put them down to buy a drink on the train, and he forgot them. When he went back to retrieve them, they were gone. He was heart broken and very upset to have lost them. He had put all his reading and thinking and composing into each one. 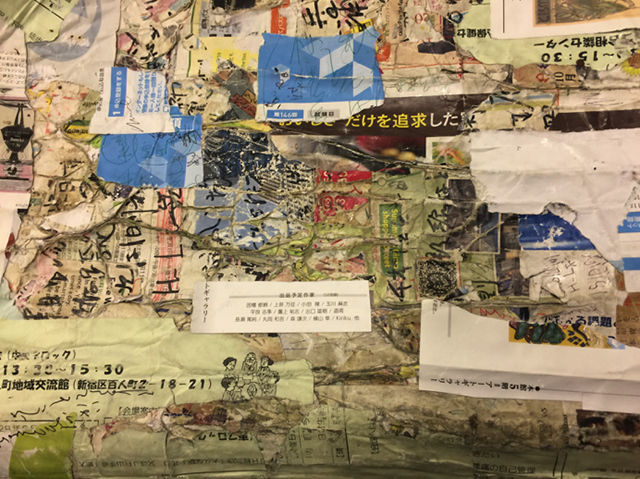 He soon became used to my nosey questions and when I asked if I could see the cover, he gladly showed me, pointing out the number of mends and additions and overlays. Not unlike the spirit of Boro, a somewhat unconscious work of patching things together to strengthen and fortify, his collages had a new life of their own removed from the original boxy orthodoxy of a newspaper. I asked him if he referred to his collages after he had created them and he said, Oh yes! They are very important to me.

When I told him I was interested in cloth collages, indigo boro, he told me he was from Okayama and his grandmother used to weave Asa or hemp, so he was very familiar with what I told him I collected. He looked at my workman’s pants and recognized them, realizing that we had many, eccentricities in common. 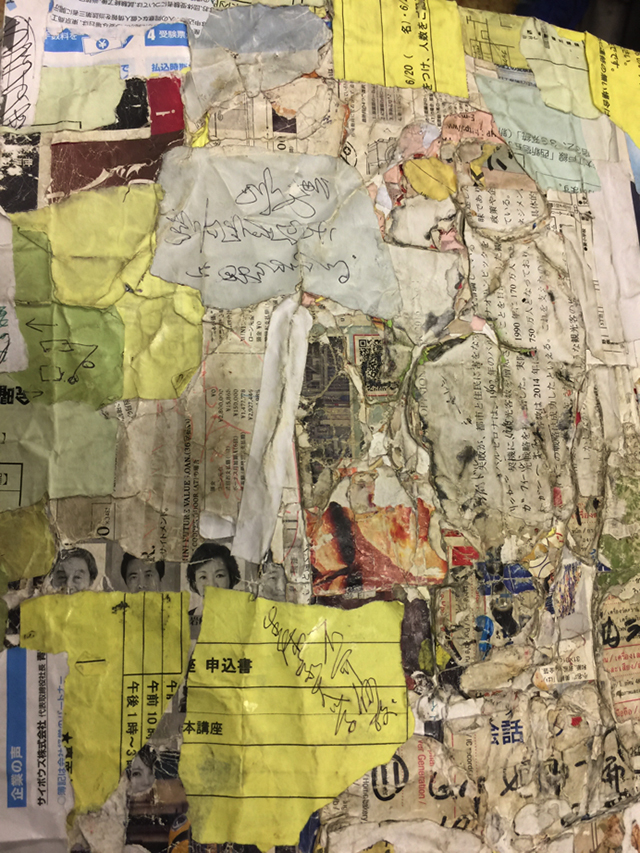 His workmanship had a sense of urgency to it – underlines, circles, blackouts, cross hatches. It must have meant something to him, but I couldn’t even tell which side was up. I couldn’t read it, shame to say, so there was no invasion of privacy – other than brazenly sitting next to him on the train and asking none-of-my-business questions.

He told me he used to work in the oil industry in Texas but said nothing of his current life other than making scrapbooks of admirable heft and girth. I was impressed at the amount of reading that must have precluded them. 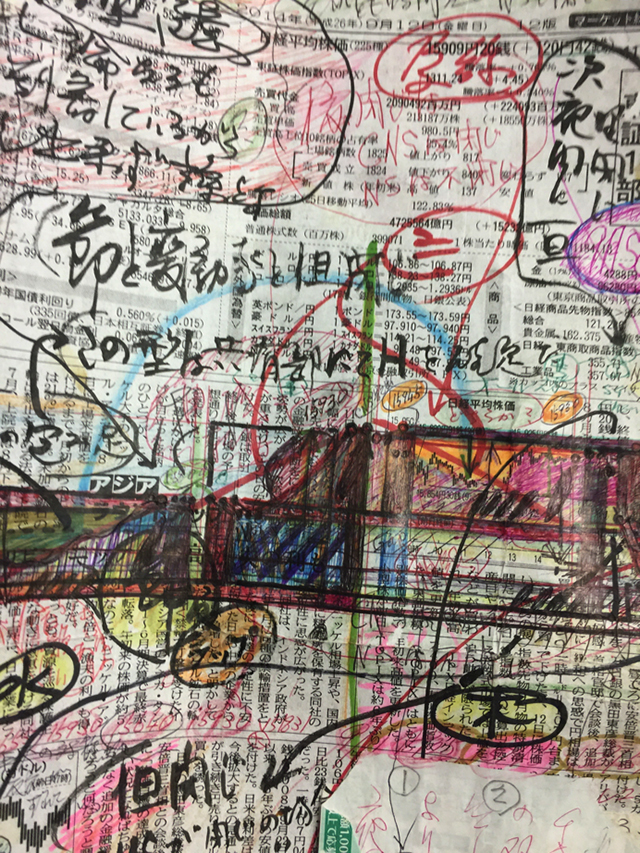 After he had recovered from the surprise of having a strange looking old woman across him and start barraging him with questions, he wound up maybe even gratified that he had found a soul mate – fellow hoarder? who could appreciate his obsession with preserving and annotating newspaper clippings.

Time was up. Azabu Juban was the next stop and I asked if I could take a photo of him. He gladly smiled with his scrapbook of treasures on his lap. 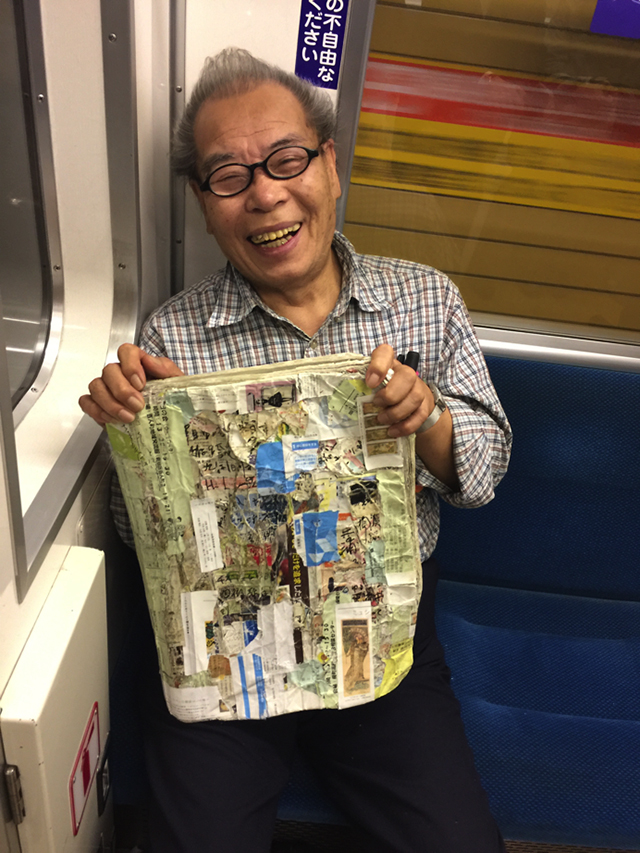 5 Responses to I MET A MAN

Leave a Reply to Blue and White Cancel reply