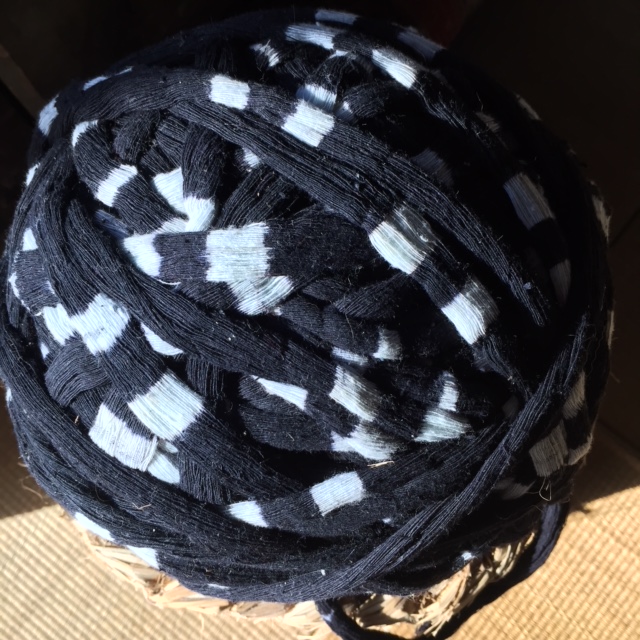 After travel to Pakistan! And Sri Lanka for several weeks at Christmas time, a return to our 300 year old Minka, Japanese farmhouse in the wilds of Karuizawa, gave me a new perspective on our life there. The beautiful old barebones house was hauled from Gifu 40 plus years ago, all ancient straight beams on flatbed trucks and reconstructed as a gasshozuri, A frame house in the shape of hands in prayer, mostly post and beam construction. Since then, quiet circles have crept into our life there, and soften it with their roundness. A morning with my iphone catalogued a surpising number of circles that have unwittingly taken up residence there.

Words are not necessary here. Only a brief explanation of what the objects are and sometimes where they came from.

Above: a beautiful ball of indigo kasuri/ ikat indigo thread predyed before weaving.

On my desk, three nearly perfect round pebbles picked up on walks in the woods, remind me of the perfect maru ishi, round stones that are objects of worship in some Shinto beliefs. Nearly perfect is fine with me.

Nearby, a round covered dish is encircled with a necklace of circles painted by Yasuko Omine to enhance her husband, Jissei Sensei’s dignified pot.

A pure white orb of white washi, this Akari lamp is the creation of Isamu Noguchi in the 1950’s and still strikingly modern today. Its soft light gives glow to the persimmon stained bamboo reeds that hold the white plaster in place and makes for a texture and design that no wallpaper could ever match. 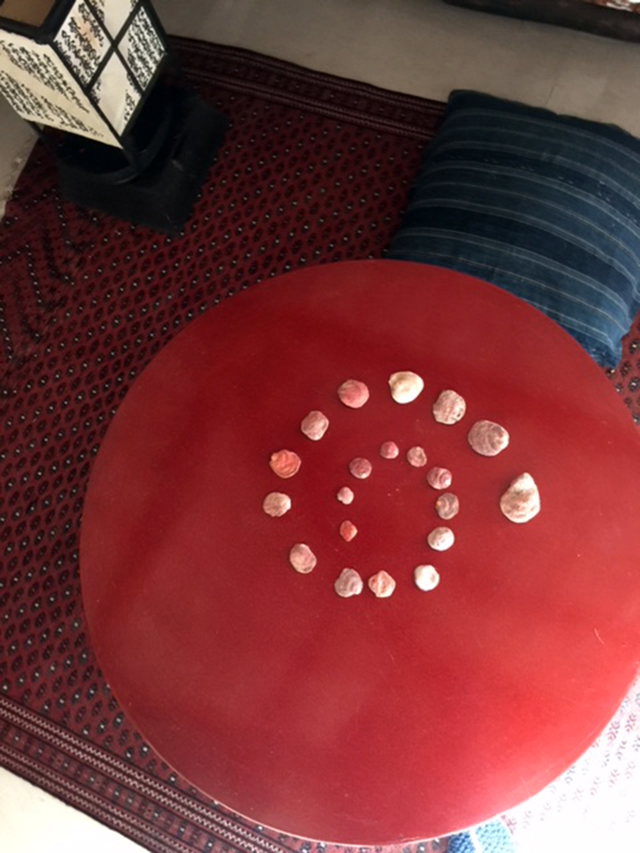 A sweet oval mirror on the bureau is too low to use really, but still does its part reflecting the beams and rope construction of the ceiling, and the mesmerizing bamboo lattice ceiling. 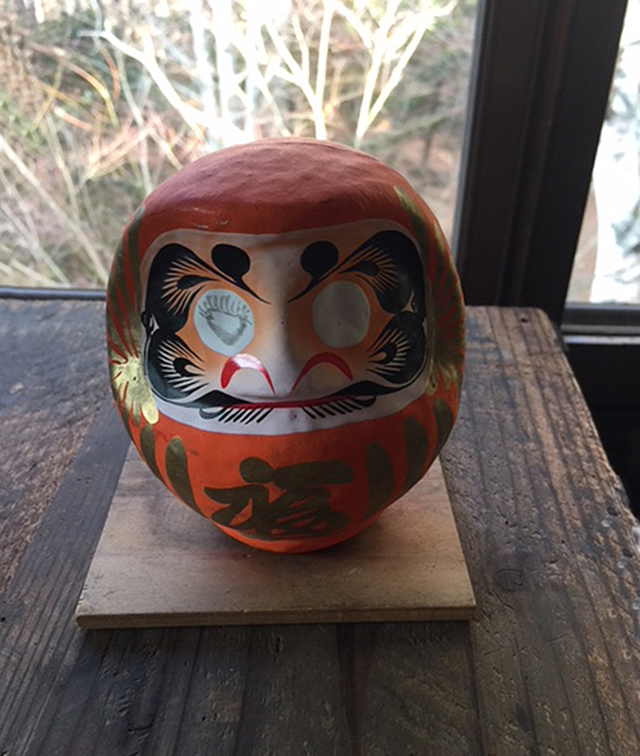 A round red daruma is for making wishes by filling in one eye when you make a wish. They are a common toy sold at the New Year when everything is possible.

When the wish comes true, you fill in the other eye. Not sure what the state of wishes is here.

A beautiful use of shapes in nature is this fishing tool whose net has long since vanished. A resourceful fisherman a hundred plus years ago found just the right shaped tree branch for his work and bent it to this pure form.

The last role for country textiles is often as lengths of rope made of the last bits of tattered textiles. Who knows what they were used for! Hanging festival banners and curtains, for mosquito netting, for anything that needed hanging or securing in the days before plastic. There were always loops of these ropes made by idle hands with unused material, hanging around waiting for use.

I can never resist their colorful braided compositions and had to slap my own hand from picking up another bundle last week at the Hachiman Shrine flea market. You can still find them occasionally today, but it won’t be long before they disappear completely from the scene.

Last gasp of old materials which, when braided together, still have strength and consummate beauty. 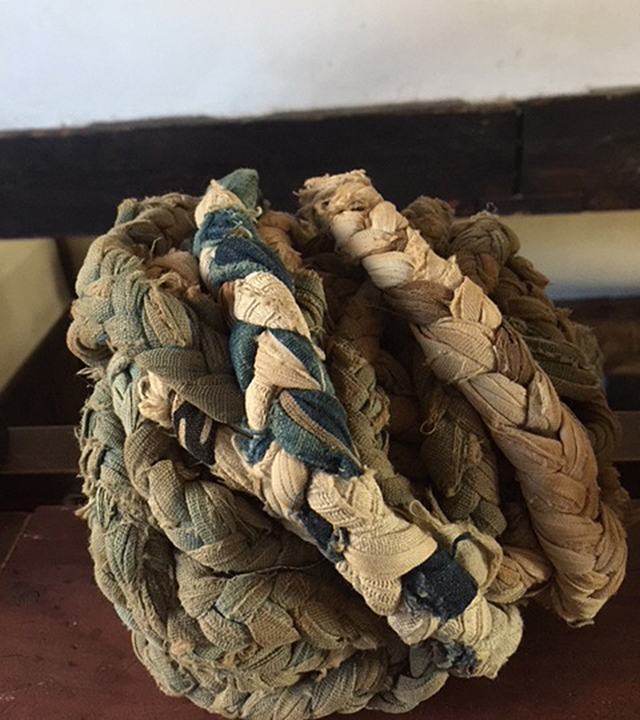 Shy but beautiful muted colors and end-of-the-road materials make a poignant portrait of Mottainai rope – too good to waste. Don’t throw it away. It can still be used!

Bright and striking indigo and white thread intended for Ikat/ Kasuri dyeing.
I am grateful I found it first.

We will be using a similar slender thread to tie around customers’ wrists from this week to make them members of the blue and white club connected by the indigo thread that ties us all together. 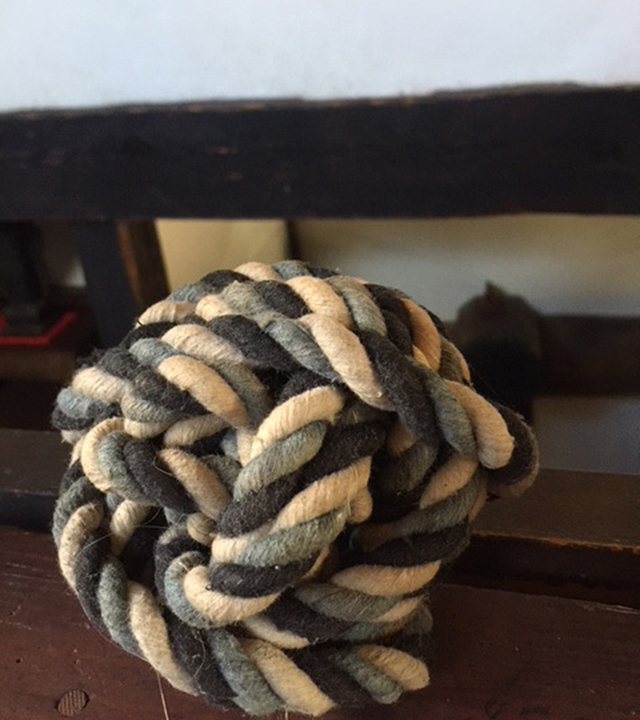 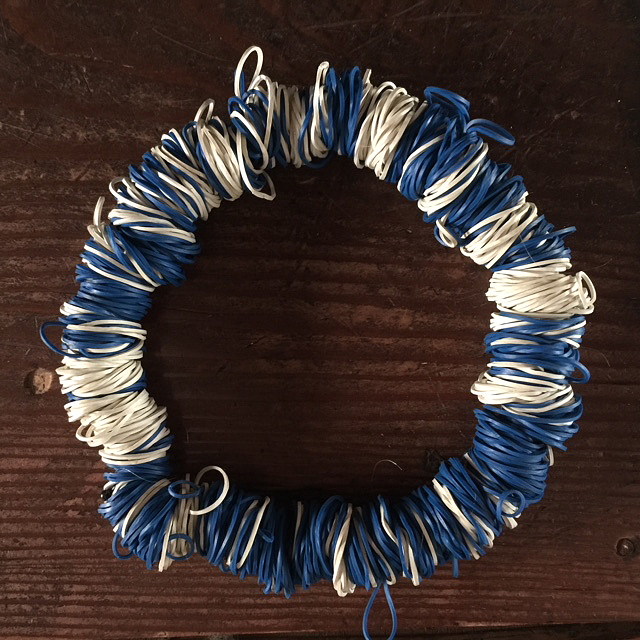 A charming circle of blue and white rubber bands made and given to me by our youngest and most creative member of Blue & White, Akiko Morimoto. 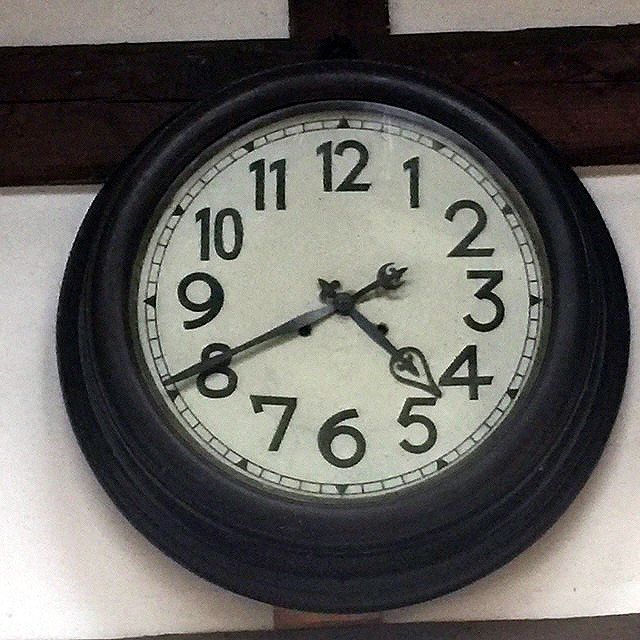 Time stands still in the kitchen of our old farmhouse. The hands of time have never moved since we hung it forty years ago. 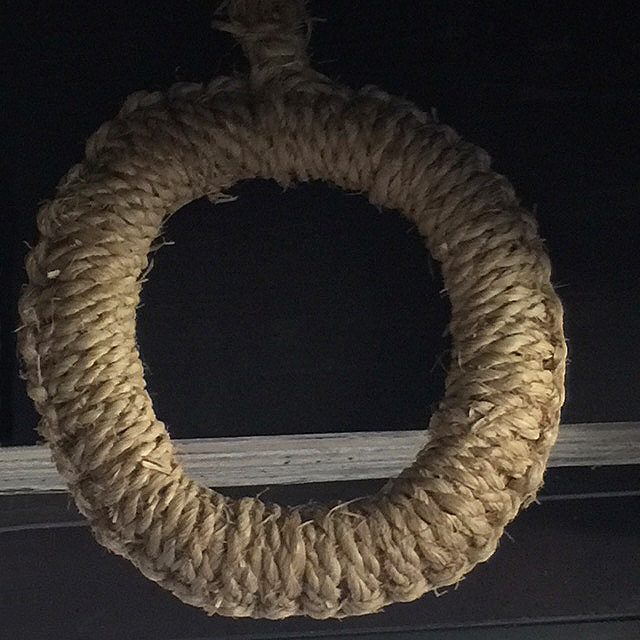 A pure circle of rice straw meticulously bound a round a base of bamboo or twigs? A perfect trivet that sees much use on our tables. 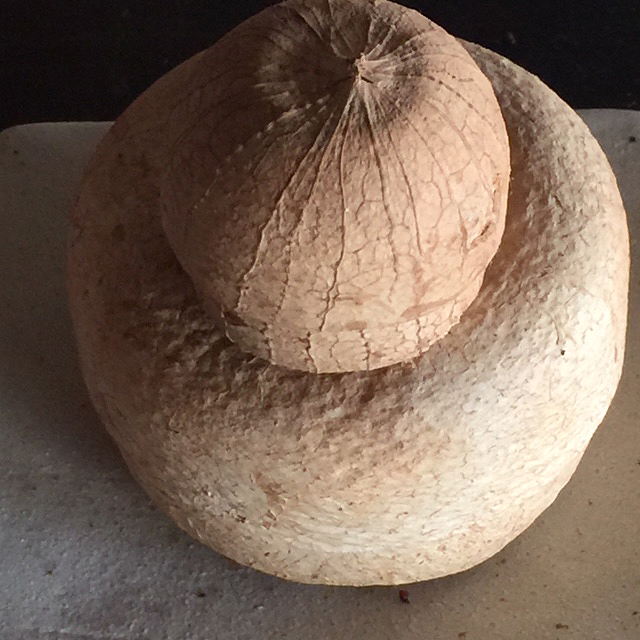 Minnesota Mingei, folk craft, exclaimed the unforgettable and irrepressible Nucy Meech when she presented it to me probably thirty years ago. These two covered containers were made of dried orange peels by American Indians and are a prize display on our large kuruma dansu that holds special artifacts of spirit. 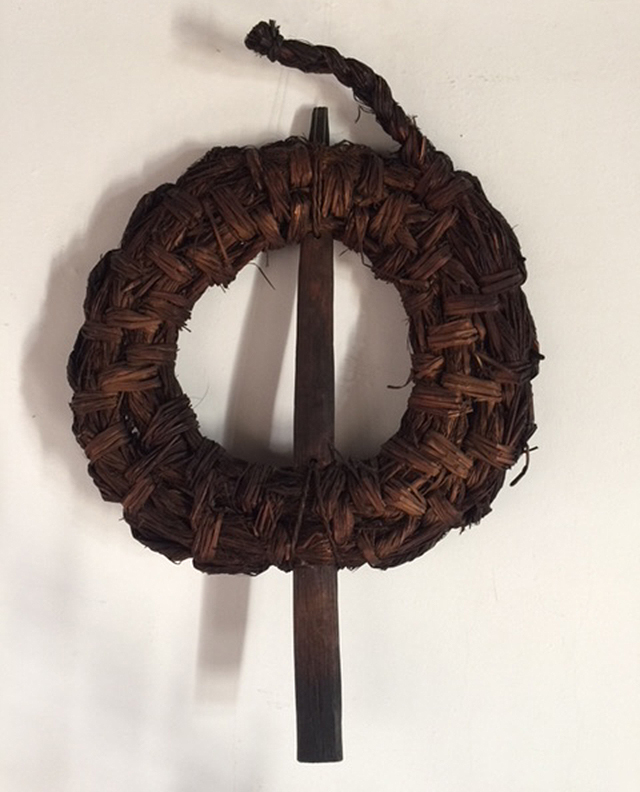 Bamboo and rice straw – using what was available. An Edo era hunter devised this trap for catching rabbits.

Cracked platter by Omine Jissei of Okinawa was not fit to sell, and so he magnanimously gave it to my husband Yuichi who treasured it so that he carried all the way back to Tokyo and then Karuizawa alternately on his head, and sometimes on his lap. It holds a place of honor in our engawa, veranda in the old Minka. 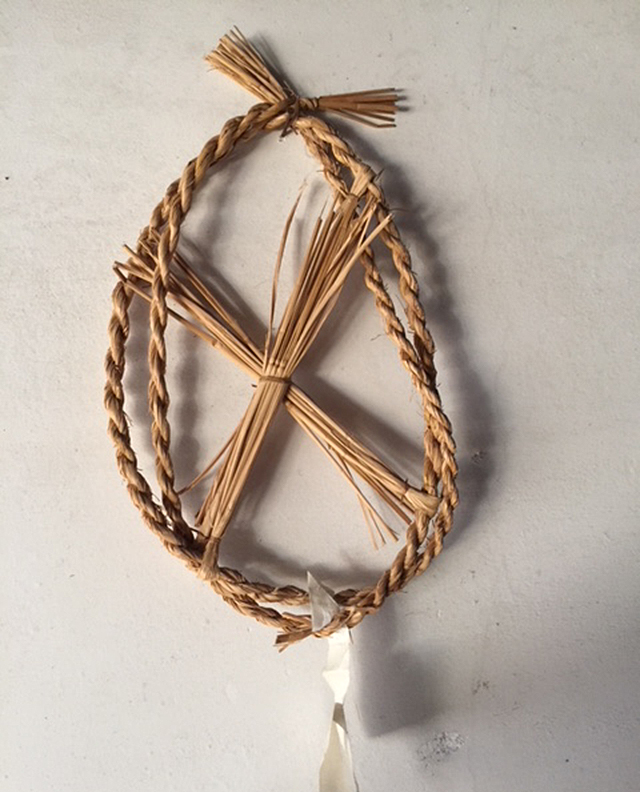 A rice straw amulet from Futami Okitama Jinja, a tiny shrine near the famous Meoto Iwa, the wedded rocks in the sea bound together by giant rice straw tethers, near Ise Jingu Shrine in Mie Prefecture.

A perfect moon shaped lid of a salt pot from Okinawa, a traditional shape that has been recreated by Omine Jissei.

Round and round. Round teabags of Typhoon tea from the UK under a battered round tin lid of a container originally used for senbei, crackers probably.

Originally used to hold a hot kettle by the irori, fire pit in the center of old farm houses, this rusted iron trivet is useful for holding hot things when we grill meat and vegetables at the table. 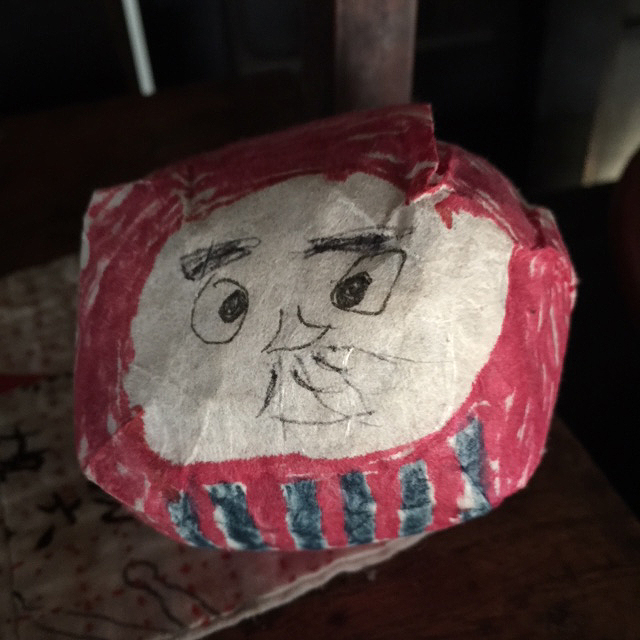 Charming homemade Daruma made of what was available in the house by Sooichiro Izumi nearly 18 years ago. It looks as though his wishes will come true!

Smiling Otafuku sake cups on a footed lacquer tray. On the bottom of the cups are faces of demons which is an insightful observation of the power of sake to change moods.

A stone rubbing of a rabbit jumping in front of charcoal moon is one side of the tall rectangular Meiji era lamp that has been converted from oil burning to electricity.
The oil light was softer and more beautiful.

A large circle of prayer beads roughly carved by a Yamabushi, mountain priest, for his arduous mountain pilgrimages hundreds of years ago. 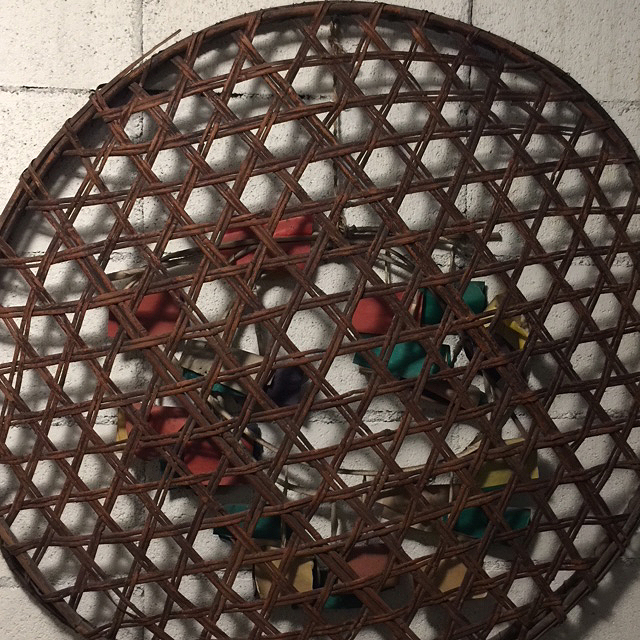 Matsuri papers decorations inside a circular basket for cultivating silk worms in the 19th century.

Primitive circles of straw bound with bamboo form a basket used for storing and protecting ceramic plates in the 19th century.

Lacquered bird on a beam finial.

Bamboo laundry basket is so large, it is thankfully never full.

An old stone base for supporting banner poles – I think!

Fires to warm the faithful who come to Kumano Jinja to pay their first respects of the year to the old shrine at the top of the hill. 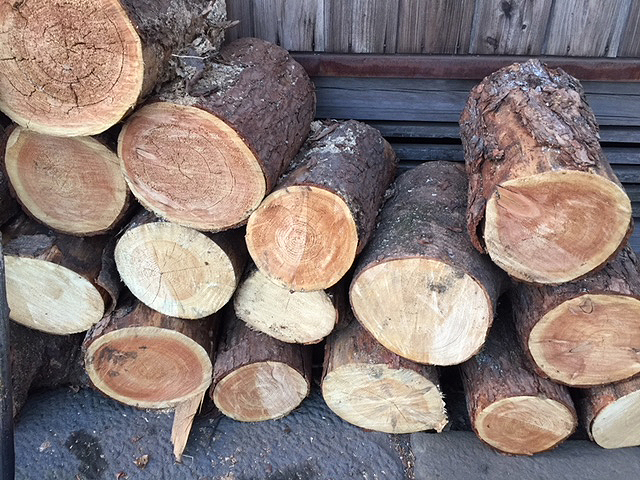 Round cuts of logs to be used for the fires to heat the line of worshippers.

Round light at Kumano Jinja that reflects the coming moon

Circular Mitsudomoe, triple commas, the crest of Kumano Jinja on the roof tiles.

And finally a papier mache dog of the New Year with his mottainai ball of braided rags, and his Boro collar, wishing everyone the best of all good things in the New Year, the Year of the Loyal and Faithful and Honest Dog!

21 Responses to ROUND IN CIRCLES